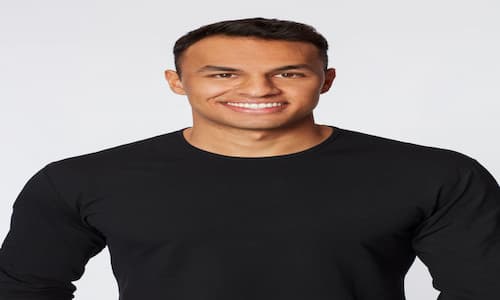 Aaron Clancy, a native of Walnut, California, is a television reality star who has gained public recognition for starring along with Katie Thurston in ABC’s dating reality series Bachelorette.

According to his LinkedIn page, he works as an account executive for HealthIQ, a California-based corporation. He did, however, present himself to the bachelorette watching as an insurance agent.

Clancy is a 26-year-old reality television star born on September 17, 1994. He has been celebrating his birthday on the 17th of September every year since 1994.

Clancy approximately stands at a height of 6 feet 4 inches (1.93 meters).

Clancy has been single. He was one of the Bachelorette season 17 participants looking for love. There is currently no information about his previous partnerships or ex-girlfriends accessible.

Aaron spent two years as a Sales Manager at 24 Hour Fitness before becoming an Account Executive. However, he started as a sales advisor at the gym before being promoted to assistant sales manager and then gym sales manager.

Aaron, a contestant on season 17 of The Bachelorette, presented himself to viewers as an Insurance Agent.

Clancy was a participant on season 17 of ABC’s dating reality show Bachelorette, which starred Katie Thurston. Katie is a bank marketing manager from Lynnwood, Washington, United States. As of June 2021, she is 30 years old. On the other hand, she was a contestant on Matt James’ season 25 of The Bachelor.

Aaron, an insurance agent, is looking for a partner who can help him achieve his goals. He also wants a woman that is intelligent and witty.

However, other contestants of the Bachelorette include:

Clancy graduated from Walnut High School in 2012. After high school, he enrolled at Mt. San Antonio College (2012-2015). He was an NCAA swimmer during his collegiate years. Aaron majored in International Studies at the University of California, San Diego.