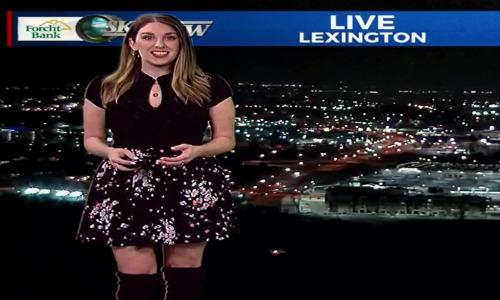 Andrews was born in the south suburb of Indianapolis, United States of America. However, she has not disclosed details of her age and year of birth to the public. Alyssa celebrates her birthday on September 28 every year.

Andrews is a very private person when it comes to her personal life. Hence she has not disclosed any details on her parents or siblings. We will be sure to keep you updated once this information is available to us.

Andrews is happily married to the love of her life Brett. The love birds met while she was working as a reporter at WTWO-TV based in Terre Haute.

With a double emphasis in industry & management and design & production, she earned a Bachelor of Arts in Telecommunications at graduation. Alyssa used the Individualized Major Program to design a major named “Social Media Journalism” in addition to her telecom degree. She integrated journalism, communications, marketing, and independent study classes for this major. All four years at Indiana, Alyssa was involved in a number of student organizations. Women in Technology was her favorite board to serve on.

She participated in student political organizations and reported on school sports for IUSTV and ‘We Are IU’ blogs. Alyssa attended Mississippi State University for another academic year or so after graduating to complete a master’s in meteorology. She kept her meteorology grade point average at 4.0 and joined the geographical honor organization Gamma Theta Upsilon. Alyssa studied how the weather affects mood while she was a student at MSU. She is constantly intrigued by how weather impacts people’s lives and she likes to analyze it from a human perspective.

Alyssa worked as an early-morning meteorologist at Lexington, Kentucky’s ABC-36 station before moving back home to Indiana. She was there for about three years. Alyssa has expertise covering all types of weather as a Midwest meteorologist. Winter storms are her favorite meteorological phenomena to forecast. Alyssa typically spends her free time playing Call of Duty or Fortnite with her friends and family.

Together with her snarky dog, Lexi, she also spends a lot of time in the dog park. Alyssa enjoys Indiana athletics! She is a huge fan of the Colts, Pacers, and racing. Even back when she was a sports reporter, Alyssa covered many of their contests and occasions. Now that she is back home, Alyssa plans to attend as many IU basketball and football events as she can.

At the moment, she works as a meteorologist for CBS4 and FOX59. Every Saturday and Sunday at 6 and 11 p.m. on CBS4, you may watch her regular forecasts. Since Alyssa interned at FOX59 alongside Chris Hagan, the sports director, she is familiar with Indianapolis News. Throughout college, she assisted in reporting on a variety of sports, including the Pacers, Indy 500, and local college teams. Due to her upbringing in Greenwood, Alyssa developed a preference for the south side. Like many of her ancestors before her, she is a proud Center Grove Trojan.

Alyssa returned occasionally on Friday nights to Indiana University-Bloomington while she was an undergraduate student to cover CG Football games for the Center Grove Sports Network. She led the CG High School cheerleaders as a senior at Indiana University. Coaching a squad that she had previously played with was a lot of fun. As a sideline reporter for Indiana’s Big Ten Network student crew during her undergraduate studies, Alyssa’s broadcasting career got its start. She subsequently went to work for IU Athletics as an internet reporter covering men’s basketball and football for the marketing division.

Alyssa liked radio broadcasting and spent her freshman year interning with JVM at the Indianapolis ESPN radio station. After college, she started working as a reporter for Terre Haute’s WTWO-TV. Alyssa reported on everything while she was there, including politics, sports, and weather. She once filled in for the station’s weather department. She became a meteorologist after returning to school since she loved it so much.

Alyssa provided her viewers with the best precise forecast for Central Kentucky when she was employed by WTVO, as determined by WeatheRate. For Good Morning Kentucky, Good Day Kentucky, and News at Noon, Alyssa worked as a morning meteorologist. Alyssa attended Mississippi State University after college and graduated with a master’s in meteorology. Alyssa looked into how the weather affects people’s moods for her master’s thesis at Mississippi State University. Alyssa joined the Gamma Theta Upsilon honor society for geography while she was a student at MSU.

Andrews has an estimated net worth of $900,000 which she has earned through her career as a journalist.