Ava Maybee Cardoso Smith is a pop singer and songwriter from America. She is popular for contesting in the 20th season of American Idol (ABC’s reality singing show).

Maybee was born on 19th February 2001. The Los Angeles singer is therefore 21 years and she celebrates her birthday on the 19th of February every year.

Maybee stands at a height of approximately 5 feet 3 inches (approximately 1.6 meters). In addition, she weighs 52 kilograms.

Maybee was born in Los Angeles to her parents Trisha (mother) and Chad Smith (father). The pop singer is the daughter of Chad Smith, a professional drummer and singer of the iconic American band Red Hot Chilli Peppers. Additionally, Maybee’s mother is the President & Chief Giving Officer at The Chuck Lorre Family Foundation.

In addition, the singer-songwriter’s stepmom is Nancy Mack. She has five half-siblings from her dad’s side; four half brothers and one half-sister. The brothers are Justin, Cole, Beckett, and Dashiel whereas her sister is Manon.

Furthermore, the singer’s dad has been the drummer for Red Hot Chilli Peppers since 1988, a group that was inducted into the Rock & Roll Hall of Fame in 2012. In addition, Chad is also the drummer of the hard rock supergroup Chickenfoot which was formed in 2008. Additionally, he is a drummer of the all-instrumental outfit Chad Smith’s Bombastic Meatbats (formed in 2007). Moreover, Smith worked on an album that won 5 Grammy Awards in 2007 with The Chicks on ‘Taking the Long Way. 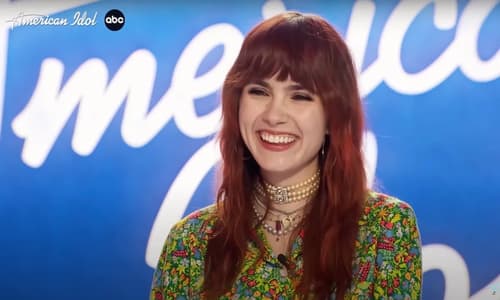 The American Idol contestant was diagnosed with scoliosis, an abnormal and sometimes fatal curving of the spine. This resulted in her quitting dancing at 14 years old. Moreover, according to her mother, it was hard for her to even sit in classroom chairs so she took her to see David Skaggs, the chief of Children’s Hospital Los Angeles’ Orthopaedic Center. In addition, she did a spinal-fusion surgery after monitoring her condition for two years. Moreover, she is now cured and back to doing activities as usual following the surgical procedure.

Currently, Ava is a junior at New York University.

Maybee is a contestant in ABC’s reality singing show American Idol season 20. The season premiered on February 27, 2022. Moreover, it is judged by Katy Perry, Lionel Richie, and Luke Bryan.

Furthermore, during her audition performance which aired on March 27, 2022, she did a rendition of Stevie Wonder’s ‘Lately’. The singer’s performance was praised by the judges and received a Golden Ticket to Hollywood. Additionally, the singer sang ‘Roxane’ by THe Police during the Hollywood Week Challenge. Moreover, she advanced to the Hollywood Week Duets Challenge which aired on April 3, 2022.

Moreover, since she was 5 years, the singer has been singing. Currently, Maybee is a junior at New York University. Additionally, she was selected to participate in the prestigious NYU/TISCH/CLIVE Davis School of Music High School Program. Maybee was one of the 30 students selected nationwide. Additionally, she was selected for Interlochen’s songwriter and Rock Program as well as Grammy Camp’s Vocal Performance Camp.

Furthermore, Ava has also performed in notable events including singing the national anthem at Lakers and Dodgers games. The singer debuted her first solo showcase at The Nice Guy. Moreover, Lay Low, See Me Now, Colors, and Mood Swings are some of the original songs that she has released.

Furthermore, the Los Angeles-based singer serves on the Teen Board of Heartbeats of VIP, a teen group that promotes anti-violence in schools. Similarly, she is also a Youth Ambassador for Children’s Hospital of Los Angeles and the co-founder of The Unicef Young Ambassadors.