A Santa Barbara native, Elizabeth Poett is a seventh-generation cattle rancher. She lives and works on her family’s cattle ranch, Rancho San Julian. In addition, she hosts her own show, Ranch to Table.

Poett is said to have been born in the 1970s. However, the cattle rancher is yet to reveal her date of birth thus it is unclear when she celebrates her birthday.

Poett stands at a height of 5 feet 9 inches (approximately 1.75 meters). However, the rancher’s weight is currently under review.

Elizabeth’s parents are Jim (father) and Marianne (mother). The rancher was born at Cottage Hospital in Santa Barbara. She was raised on Rancho San Julian, a 14,000-acre ranch on Santa Barbara’s Central Coast. Moreover, they live nearby along with a handful of cousins and friends. In addition, Jim her father was one of the first ranchers in this part of California to raise organic beef. Moreover, her mother Marianne is the founder and editor of a local newspaper. Moreover, the cattle rancher has a brother named Justin. 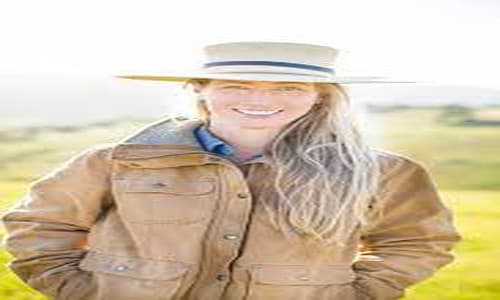 Poett is happily married to her husband, Austin Campbell, a fellow cattle rancher. Campbell was raised in the then Cojo Jalama ranch in the coastal land of California. The couple met during branding where Austin was roping and she was on the ground crew. The two began dating and eventually got married. Moreover, on September 6, 2020, they celebrated their 11th wedding anniversary. Furthermore, Campbell is Rancho San Julian’s cattle and ranch manager.

Additionally, the couple is proud parents to two children, both sons named Jack and Hank.

Poett went to Kenyon College in Ohio. Moreover, speaking about her education during an interview with Women’s Heritage, the rancher said she left the ranch for a boarding high school at the age of 14.

Moreover, after high school, Poett went to college in the Mid West and lived in New York City for a couple of years, and then moved to Los Angeles.

Poett hosts her own TV show Ranch To Table. Moreover, in the show, she showcases her abilities to run her family’s 14,000-acre ranch while she makes regional dishes using her own fresh ingredients.

In 2017, she launched The Ranch To Table where she hosted cooking classes, special meals, and educational events at Rancho San Julian’s historic adobe. Additionally, the rancher has a blog and website of the same name. Elizabeth regularly shares her recipes and insights.

Furthermore, she started Rancho San Julian Beef, a business that sells her family’s chefs and consumers at regional farmer markets. Moreover, this was after spending years in New York and Los Angeles where Poett previously worked.

Poett’s net worth is currently under review.