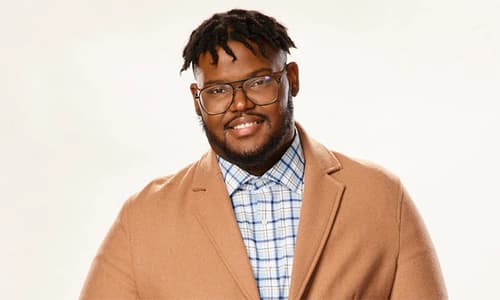 Justin Aaron Black is a gospel and R&B singer and songwriter from Junction City, Kansas. He is widely known as a contestant in season 22 of the NBC reality singing competition The Voice. Previously, Aaron performed with three other musicians as Justin Aaron and the Royal Priestwood.

Aaron has a height of 5 feet 8 inches (approximately 1.73 meters). However, the R&B gospel singer’s weight and other body measurements are currently under review.

Aaron is a native of Junction City, Kansas. However, the paraeducator has not disclosed his parents identities. Furthermore, he was raised by his single mother whom he says inspired him to pursue music. Additionally, he has three siblings, two sisters, and a brother.

Aaron is married to his lovely wife Kori Reshone.

Aaron attended Junction City High School. However, Justin’s details about his college education are currently unavailable to the public domain.

Aaron is a gospel and R&B artist. Moreover, according to the praise and worship leader, he has always had a tune and that is singing was inspired by his mom. However, Justin says that he ran from singing for a very long time because he did not think he was good enough.

In addition, the singer says that he struggled with depression and learning to accept and love himself. Moreover, he says that things changed when he found the loves of his life which are First Jesus Christ, then his wife, and then music. Additionally, he previously performed with three other musicians as Justin Aaron and the Royal Priestwood.

Aaron is one of the contestants in the 22nd season of the NBC reality singing competition, The Voice. In addition, season 22 of the show premiered on September 19, 2022. Moreover, the judges are Blake Shelton, Camila Cabello, Gwen Stefani, and John Legend.

Additionally, the paraeducator performed a rendition of John Legend and Common’s “Glory” during his blind audition which was aired on NBC on October 10, 2022. Judge Gwen Stefani turned her chair for the singer which made him Team Gwen.

Justin is active on Instagram. Moreover, his handle is @jaaron_88 which has over 1700 followers as of October 2022.