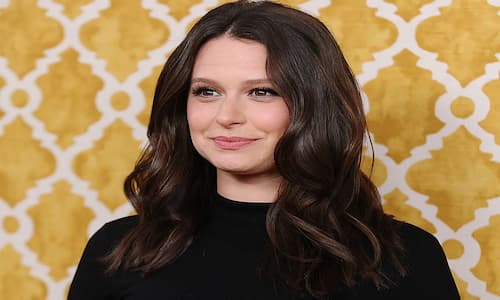 Katie Lowes, a native of Queens, New York City, is an American actress and theater director. She has gained public recognition through her role as Quinn Perkins in the ABC political drama series Scandal (2012–2018).

Lowes is a 38-year-old actress and theater director born on September 22, 1982. She has been celebrating her birthday on the 222nd of September every year since 1982.

Lowes approximately stands at a height of 5 feet 4 inches (1.63 meters).

Lowes, an American actress and theater director, keeps a low profile when it comes to her personal life. She has also refused to provide any information about her parents, siblings, or relations. We are, however, keeping an eye on her and will update this information as soon as possible.

Lowes is a married woman who has been married to her husband Adam Shapiro since 23 June 2012. Her husband Adam is an actor with whom they have acted together in an episode of Scandal. This loving couple has two children, a son, Albee Quinn Shapiro (born October 2, 2017), and a daughter, Vera Shapiro, (born November 22, 2020).

Lowes made her screen debut in the FX series Rescue Me in 2004 and then co-starred in the Showtime project Hate alongside Marcia Gay Harden. She went on to guest star in a variety of TV shows, including The Sopranos, Without a Trace, NCIS, Ghost Whisperer, Castle, Leverage, and The Closer. Also, she played alongside Laurie Metcalf in the short-lived comedy-drama series Easy Money on The CW in 2008. Additionally, she participated in a number of low-budget films, including The Job (2009), Bear (2010), and Café, in addition to her television roles (2011).

Lowes has gained public recognition for her role as Quinn Perkins, previously Lindsay Dwyer, in Shonda Rhimes’ ABC political thriller Scandal. Prior to Scandal, Lowes appeared in guest parts on Grey’s Anatomy and Private Practice, both created by Shonda Rhimes. She worked as a nanny for Connie Britton’s adoptive son before obtaining her big role on the show.

She is a co-founder and director of the Los Angeles-based IAMA Theater Company, as well as a supporter of the black box theater community in Southern California, with her husband, Adam Shapiro. Lowes made her Broadway debut in the Broadway version of Waitress in July 2018, alongside her husband Shapiro. They stayed in the show till the 7th of October, 2018.

It was on May 14, 2021, that CBS announced that Lowes and Pete Holmes would star in a sitcom based on the life of laid-off auto worker-turned-professional bowler Tom Smallwood.

A native of Queens, New York City, Lowes is a graduate of New York University’s Tisch School of the Arts, where she received a BFA in acting.

Lowes has a net worth that is estimated to be about $2 million.