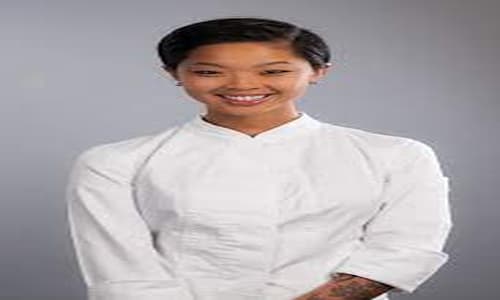 Kristen Kish is a Korean-born American chef. The chef is best known for winning the tenth season of Top Chef. In addition, Kish was formerly chef de cuisine at Menton in the Fort Point neighborhood of Boston. Moreover, Kristen is the host of 36 Hours on Travel Channel and a co-host o Fast Foodies on TruTV.

Kish is 38 years old. She was born in December 1983. However, Kish’s exact date of birth is not publicly available thus it is not clear when she celebrates her birthday.

Kish has a height of 5 feet 6 inches (approximately 1.68 meters). In addition, her weight is approximately 55 kilograms.

The top chef was born as Kwon Yung Ran in Seoul, South Korea. In addition, she lived in a few orphanages as an infant. The top chef winner was adopted when she was four months old by a family in Kentwood, Michigan.

Kish publicly announced the one-year anniversary of her relationship with her girlfriend at the time, Jacqueline Westbrook on March 28, 2014, on Instagram. Moreover, on September 29, 2019, she announced her engagement to Bianca Dusic, the VP of Food & Beverage for Standard Hotels in an Instagram post. The lovebirds married on April 18, 2021.

Kish worked as a model in school. The Top Chef attended Le Cordon Bleu in Chicago where she earned an A.A. in culinary arts.

The Korean-born American chef became an instructor at Stir, a culinary demonstration kitchen in Boston, Massachusetts. Additionally, in 2012, she was promoted to Stir’s chef de cuisine by Barbara Lynch, the owner until March 2014. Kristen released a book of recipes co-authorized with Meredith Erickson, Kristen Kish Cooking: Recipes and Techniques. Furthermore, in May 2018, the chef became chef at her new restaurant, Arlo Grey, in Austin, Texas.

In 2012, Kristen competed in Bravo’s Top Chef. Kish was invited to participate in the qualifying rounds alongside Stephanie Cmar, her close friend from culinary school. Moreover, she was tasked with creating a signature soup that would be judged by Emeril Legasse. The chef passed the challenge and moved on into the competition proper. Furthermore, she won four elimination challenges from there creating dishes as varied as French cuisine and onion rings before being eliminated during “Restaurant Wars’ (episode 11). Moreover, with five consecutive victories in ‘Last Chance Kitchen’, Kish was able to win her way back into the main competition. She made it to the finale with Brooke Williamson where she defeated him and was crowned the Top Chef. Furthermore, Kristen became the first competitor to win after winning “Lost Chance Kitchen”. Moreover, she became the second female winner in the history of the Top Chef franchise.

Kish co-hosted the pilot season of 36 Hours, a series on the Travel Channel with a TV analyst and former soccer player, Kyle Martino in 2015. Moreover, the show follows Martino and Kish as they spend 36 hours eating, drinking, and exploring a given city. Furthermore, the show is an adaptation of the New York Times travel column of the same name.

Kish is one of three chefs featured on TruTV’s cooking competition show Fast Foodies starting in 2021. Moreover, in each epiode, a celebrity presents their favorite fast-food item. Additionally, the chefs compete in two rounds. Moreover, the chefs duplicate the dish as exactly as possible first. Moreover, the chefs re-imagine the item in an haute-cuisine interpretation secondly.

Kish has a network ranging between $1 million and $5 million.