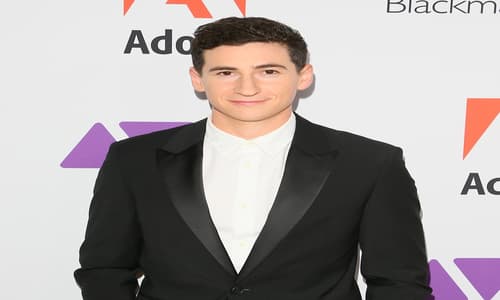 Born Samuel Bryce Lerner, Sam Lerner is an actor from America. His roles as Geoff Schwartz on the Goldbergs, Quinn Goldberg in Project Almanac well as Chowder in Monster House brought him into the limelight.

Lerner’s parents are Ken (father) who is an actor and Patricia Klein (mother) who is a reporter. Moreover, he has one sibling, a sister named Jenny. Michael, his uncle is also an actor.

Lerner has been in a relationship with Olivia Sui, a member of Smosh since 2018. However, no information about the couple and their relationship at the moment.

Lerner’s career began when he was nine years in the feature film Envy as Ben Stiller and Rachel Weisz’s son. Moreover, in the pilot by ABC, My Life With Men,he also appeared as the son of Wendie Malik and Sam Robard’s characters.

In addition, in 2006, in the computer-animated film Monster House, he voiced one of the leads, ‘Chowder’. Additionally, he was nominated for the 2006 Annie Award for Best Voice Acting due to this role. Moreover, he has appeared in several TV Shows like The King of Queens, Two And a Half Men, and Malcolm in the Middle.

Lerner’s net worth is around $3 million.