Tommy Edwards is a singer, songwriter, musician, and performer from America. He is popular for NBC’S singing reality show The Voice Season 21.

Edwards was born in Nashville, Tennessee, United States. However, he has not given details about his exact date of birth although his age as of 2021 is approximately between 25 to 30 years.

Edwards’s parents are Tommy Edwards Sr. (father) and Keri Lacey (mother). Moreover, he has one sibling, a brother named Josh Edwards. He has American Nationality. 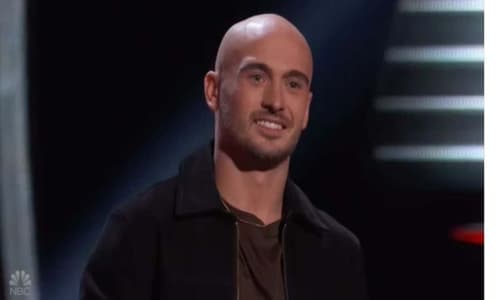 Edwards is married to Breanna. Moreover, together they have two children

Edwards was born in Nashville, Tennessee. Currently, he lives in Kalispell, Montana, United States.
His hobbies include; singing, playing piano, guitar, composing, and traveling.
Moreover, his favorite pet is a dog.

During The Voice Season 21 Blind Auditions on 5th 0ctober 2021, Edwards sang Trains “Drops of Jupiter”. However, his pressure was more intense as Ariana Grande’s team was already complete at the time of his performance, and Shelton, Clarkson, and Legend’s teams had only one slot open on their teams. Luckily, he earned an immediate response from Shelton with his approach to the song.

Shelton said he liked that with excitement as he swiveled around in his chair. However, it became more difficult for Shelton to officially add Edwards to his team. This is because Legend swiveled his chair shortly after but the country star put up a fight.

Moreover, Shelton added that he loved his voice and loved how he got lost in the music. Also, he added that he thinks that is what is going to take him to even exist on the show for a little while or make it to the finale

In addition, Legend told Edwards that he knows how to make his presence felt. He also said that it is not always easy with rock music and that he had a powerful range and electricity and would want for him to be in team Legend.